Sword of the Stars: The Pit Wiki
Register
Don't have an account?
Sign In
Advertisement
in: Main, Knowledge 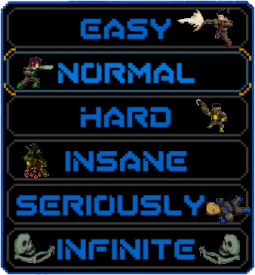 This page is dedicated to summing up the main differences between Easy and Normal, and then between Normal and the other higher difficulties.

Easy serves as a great introduction difficulty; As such, new players (even rogue-like veterans) might not want to dismiss it when starting out.

Your overall "meta-progression" in the game is partly measured by the amount of Messages you've discovered. To tackle higher settings, the more recipes you have, the better.

Note that Seriously and Infinite can only be accessed if you have the Mindgames expansion, and that Infinite is unlocked once you've beaten the game.

Infinite is also not a difficulty setting per se, it likely begins at a certain existing setting and gradually increases.

It is recommended to play Easy at least once or twice before moving on, for new players. This allows you to grab many key crafting Recipes, although you will only be able to unlock the first 50 messages when you access Computer Consoles. It also allows you to become more familiar with dangers which, on other difficulties, would quickly (or slowly, but surely) end your game.

The biggest particularity of Normal difficulty is pretty much the absence of all Easy difficulty perks. To compensate, you can now unlock all of the 150+ Messages from Computer Consoles. This allows you to unlock plenty of new Messages and "progress" further, win or lose.

Contrary to popular belief, randomness actually isn't the chief decider of your success rate on Normal (or even Hard). There is simply a lot to learn and refine; don't let a few dirtnaps discourage you!

Harder difficulties set themselves apart by adding various penalties and tweaking certain spawns (Monsters, noticeably). While Hard itself is do-able with enough dedication, the highest difficulty setting can be elegantly summed up by the game intro's final protip:

Theoretically, beating the highest difficulty in The Pit takes perfect play from beginning to finish. And even if you have the iron discipline and game mastery required for that, randomness will still defeat many of your runs, particularly early on. Before Mindgames was released, only ~4 Insane clears were reported. As of June 2014, Seriously?! has been reported to be fully cleared twice.

Beating such difficulties is a reward in itself. Although, since you meet certain monsters (and thus ingredients) sooner and more often, the game does present added complexity in the form of wider and earlier crafting options. Your High Score is also multiplied.

Full list of all bonuses and adjustments for each difficulty is listed below:

Community content is available under CC-BY-SA unless otherwise noted.