Sword of the Stars: The Pit Wiki
Register
Don't have an account?
Sign In
Advertisement
in: Sub, Basics, Classes 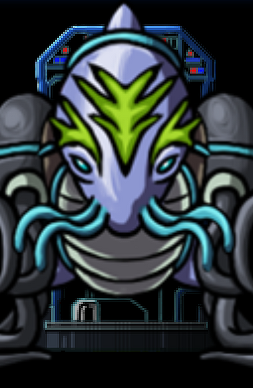 A Seeker is a reconnaissance agent for the Black Swimmers, the military of the Liir race. Ayb was sent to Arbuda to investigate rumors of the Bloodweaver, one of the seven war criminals still at large and actively hunted by the Liir for their crimes against sentience.

The Liir have powerful offensive and defensive Psionics but without armor of some kind they begin to dehydrate and die slowly.

Two words to sum up the Seeker: Glass Cannon. Due to their ridiculously high stats and their Tentacle Whip that  has a range of 2, and causes pain, an initial reaction of, "OP" will be tempered by the fact that, both in short term and long term, they don't have as much lasting power. The Seeker not only has a very low HP total, but also loses hydration when not wearing hydrating armor at 1 point per turn. Reaching 0 hydration causes dehydration, but regains 10 hydration each turn when wearing hydrating armor. Which makes life without armor even more deadly (and may limit armor options). Their armor also seems to occupy a solid chunk of equipment slots, making it so that equipment has to be juggled (ie, equipping a belt or gloves unequips their hydrating armor). On top of this the Seeker has an enormous blind spot, but this can be countered by simply ctrl moving into the blind spot to check for enemies.

The Seeker's starting stats are extremely high with the weakest link being a 35 might, this in turn, gives a huge boost on top of all of the (decent) starting skills. To top off their excellent offensive and near Engineer like abilities, they also start with insanely high psionic abilities (perhaps being a better psionic than the actual psionic). Essentially, if you want to be a cthullu-esque dolphin with massive power but dies due to a few stray bullets the Seeker is for you.

Community content is available under CC-BY-SA unless otherwise noted.
Advertisement